Settle up your differences in the arena!

MyBrute is a Flash game where two animated characters duke it out in an arena. The game is almost totally random, and like putting two insects in a cage you can’t control much besides who you put in the pit.

You can just sit back and watch as the fight unfolds. There are no controls, there is no ability to dictate tactics ahead of time. Your character may pull out their weapon (if they have one), but you have no idea which weapon they may use, or if they throw it. Sometimes it is frustrating to watch your fighter charge headlong into their opponent’s spear, swinging their fists like a pissed-off toddler. However, it is pretty satisfying when you are almost dead and then dodge your opponent’s attacks before putting them down for a dirt nap. 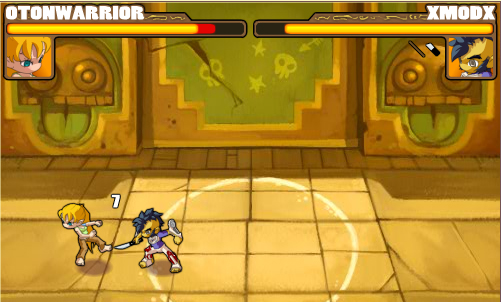 There are some very light RPG elements: characters get experience from fighting and level up, but you have no control over what attributes go up or special abilities they acquire.

The art direction is sweet, and the weapons ingenious. Some of the weapons are outrageous: apparently there is a golden kazoo; I fought someone with a pet wolf that served as a meatshield. By the time I had bludgeoned the wolf down I was at 1/4 life and had yet to hit my opponent.

It is easy to challenge friends. You can type in their name or just visit their character’s Web address. The Web address is automatically generated, which I thought was a clever thing to do. Mine’s xmodx.mybrute.com, for example. There are a few rough usability edges (why isn’t the search box at the top?), but overall the game is pretty easy to use.

There is a disciple function I have yet to explore — I think you earn pupils by people clicking on your mybrute.com link (that’s xmodx.mybrute.com if you’re interested). I am not sure if you earn experience points or not, I just know my little guy looks sad punching all by himself: 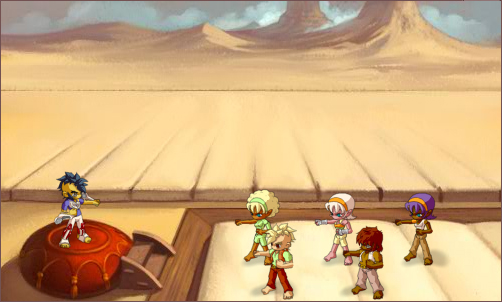